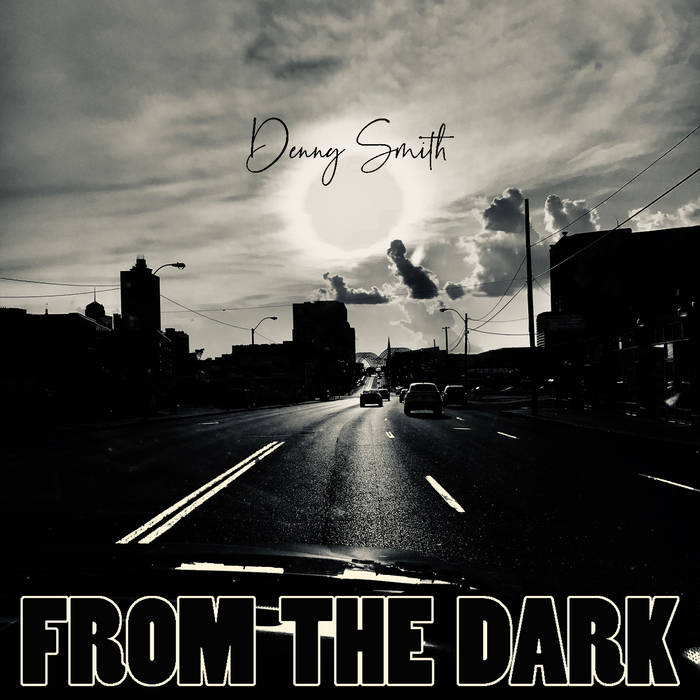 "Smith is a soulful, rustic rock `n' roller who's turned out a consistent string of fine records over the past couple of years. All delivered with a passion and desperation that demand attention. No frills. Not sappy, not loud...just oozing with great energy, good songwriting and a powerful voice." - Kool Kat Musik

Denny Smith is a Nashville, TN-based singer, songwriter, and record producer. In addition to work with his bands The Great Affairs and The Die Youngs, he’s written and produced material for other acts and had his music featured in film & television.


On his second solo LP ‘From The Dark’ ; a departure from his band’s slightly harder-edged output, he employs a more subtle, nuanced approach to the production, and a lyrical bent that makes frequent comparison to artists like Tom Petty & Butch Walker a credible observation.


“I wanted to strip away some of the artifice that can go along with doing the straight-up Rock ensemble thing, and maybe see if I could cut a little closer to the core, and tell stories that seemed less like they’d been viewed from a distance or through some lens, lived vicariously. In fact, I didn’t really want to “tell stories” at all, what I wanted to do was get some things off my chest as truthfully and un-self-consciously as possible.”


The followup to 2016’s ‘An Overnight Low’ was co-produced with Grammy-winning Mixer/Engineer Michael Saint-Leon(Buddy Guy, Christone “Kingfish” Ingram), and Smith calls it “10 songs about untimely passings. unexpected diagnoses, unrelenting addictions, and the unfortunate reality that such is life sometimes, when a younger man’s days are behind you. “


TRACK LISTING:
From The Dark
Glass Slipper
I Will
The Bruise
The Whole World’s Clown
Trying To Break Your Heart
When The Darkness Come To Town
These Blues
Like God’s Asleep
One Mississippi


“Another top-shelf collection of kick-ass material which begs to be featured within any play list that includes Kings of Leon, Counting Crows, Tom Petty and The Heartbreakers, and their ilk. Thought provoking lyrics coupled with Smith’s raspy voice invite you inside the album as it often harkens back to the kind of grit and raw emotion of Rod Stewart’s 'Every Picture Tells a Story'.” -Popmart Zoo

ENGINEERED, MIXED, AND MASTERED BY MICHAEL SAINT-LEON AT THE SWITCHYARD

Track Name: From The Dark
FROM THE DARK

IT’S ENDLESS WAKING HOURS
SLEEPLESS IN MY BED
HELPLESS TO THE POWERS
THAT RUMMAGE THROUGH MY HEAD
THEY SING TO ME LIKE ANGELS
THEY’RE TURNING ME AROUND
’TIL I GET LOST, ENTANGLED
IN ANOTHER LONG SUNDOWN
BUT YOU CAN ALWAYS FIND ME
WHEN THIS WORLD JUST BREAKS MY HEART
AND SHOW ME MY WAY BACK HOME FROM THE DARK

SOMEHOW YOU REMIND ME
YOUR EYES KICK UP A SPARK
THAT LIGHTS MY WAY BACK HOME FROM THE DARK
Track Name: Glass Slipper
GLASS SLIPPER

DO YOU MISS THE LAUGHTER, IN THE FIELDS OF YOUTH
HAVE YOU COME TO FIND SOME VERSION OF THE TRUTH
THAT’S NO EVER AFTER, JUST A CROOKED LINE THROUGH
AND NOTHING LIKE THE DREAM THEY SOLD TO YOU
THAT IT’S GONNA BE ALRIGHT, GONNA BE ALRIGHT

LIKE A BROKEN LADDER, A MAP TO THE MOON
OR A LUCKY STAR WHOSE WISHES DON’T COME TRUE
WHEN YOUR PRAYERS DON’T MATTER
EVERY SONG’S SONG BLUE
IT’S GONNA BE ALRIGHT, GONNA BE ALRIGHT

THERE ARE SOME FIGHTS YOU’RE GONNA LOSE
YOU’LL BE TALK OF THE TOWN ’TIL YOU’RE NOT
AND YESTERDAY’S NEWS
‘CAUSE THE SPOTLIGHT, IT CAN’T ALWAYS SHINE ON YOU
BUT IT’S ALRIGHT, IT’S GONNA BE ALRIGHT

SO YOU THINK YOU’RE SHATTERED
YOU’RE SHOT RIGHT THROUGH
AND THE BEST OF TIMES IS FADING FROM YOUR VIEW
WHEN THE PIECES SCATTER, THERE’S NOTHING LEFT TO LOSE
IT’S ALRIGHT, IT’S GONNA BE ALRIGHT

I’VE BEEN WAITING FOR YOU, HERE IN THIS BED
SEEMS LIKE HOURS, I’VE SPENT LOST IN MY HEAD
TALKIN’ MYSELF DOWN, FROM ANOTHER FINE LEDGE
WITH A VIEW OF THE CITY, THAT I’D RATHER FORGET

AND I HOPE I’M JUST SPINNING’ WHEELS THAT GO NOWHERE
I CAN’T HELP MYSELF BUT WONDER
I KNOW, I KNOW I’VE HAD ALL NIGHT TO TAKE IT THERE
AND LET IT PULL ME UNDER

WHERE THE WATER’S TOO DEEP
AND THE SECRETS YOU KEEP, THEY SPILL
WHEN YOU TALK IN YOUR SLEEP
AND YOU’RE TELLIN’ ME THINGS THAT KILL
I DON’T CARE WHAT YOU’VE DONE
IF YOU’RE READY TO RUN, I WILL

WHEN THE WATER’S TOO DEEP
AND THE SECRETS YOU KEEP, THEY SPILL
WHEN YOU TALK IN YOUR SLEEP
AND YOU’RE TELLIN’ ME THINGS THAT KILL
WHEN YOU’RE LEFT WITH THE GUN
AND YOU’RE READY TO RUN, I WILL
BE THE HAND THAT YOU HOLD
WHEN THE BODIES GO COLD, AND STILL
LET THE STORIES GET TOLD
LET THE RUMORS UNFOLD, UNTIL
I DON’T CARE WHAT YOU’VE DONE
IF YOU’RE READY TO RUN, I WILL
Track Name: The Bruise
THE BRUISE

CHASIN’ LIGHT, LEFT OR RIGHT
MAYBE SOMEWHERE SAFE
LONG NIGHTS OF FEELIN’ LIKE A D.O.A.
WHEN, LIKE THEM, YOU’RE SO ALONE

NEVER MIND, I’LL BE FINE
AIN’T IT WHAT YOU’D SAY
BLIND EYES SEE NOTHING TO EXPLAIN AWAY
WHEN, LIKE THEM, YOU CAN’T LET GO

I’M DYIN’ TO KNOW WHAT YOU’RE TRYIN’ TO PROVE
HE’LL NEVER BE OVER YOU
ARE YOU LYIN’ TO ME, OR JUSTIFYING A TRUTH THAT YOU ALWAYS KNEW
ARE YOU TOO GONE TO SEE THAT YOU’RE BUYING IT USED
INSTEAD OF SHINY & NEW
WHAT KEEPS YOU TURNING A CHEEK
AND HIDING THE BRUISE

MADE A LIFE, PLAYED HIS WIFE
PAID FOR HIS MISTAKES
A HIGH PRICE, BROKEN WHERE YOU SHOULDN’T BREAK
WHEN, LIKE THEM, YOU COULD’VE KNOWN

WAKE ME WHEN THE WAR’S NOT LOST, AND YOU’VE FOUND YOUR PEACE
A RIVER YOU CAN STAND TO CROSS ON YOUR OWN
TELL ME IF I SOUND TOO COLD, AND I’LL TRY SOME HEAT
‘CAUSE KID, YOU COULD BE SOLID GOLD TO THE BONE

BUT YOU TAKE FROM THE GIVERS
AND NEVER LET IT BRING YOU ‘ROUND
RATHER BURN, RATHER SHIVER
THAN EVER PUT THE GOOD FOOT DOWN
YOU’D RATHER BE THE WHOLE WORLD’S CLOWN

THEY TELL ME I SHOULD SWEAR YOU OFF, LET YOU ACT YOUR AGE
BUT I CAN’T LEAVE YOU LYIN’ IN THIS LONELY OPEN GRAVE
IT’S KILLING ME TO SEE YOU WALK, WATCH YOU WASTE YOUR DAYS
‘CAUSE THEY’LL NEVER COME LIKE THIS AGAIN ALONG THE WAY

WHAT YOU TAKE FROM THE GIVERS
YOU NEVER LET IT BRING YOU ‘ROUND
RATHER BURN, RATHER SHIVER
THAN EVER PUT THE GOOD FOOT DOWN
YOU’D RATHER BE THE WHOLE WORLD’S CLOWN

LET’S JUST PRETEND THIS DOESN’T THIS DOESN’T GET YOU IN THE…
END UP LIKE YOUR FRIENDS
THE ONES THAT YOU DEFEND
WHO LEFT YOU WHEN YOU NEEDED THEM
TO FIND YOURSELF ALONE AGAIN
Track Name: Trying To Break Your Heart
TRYING TO BREAK YOUR HEART

I THOUGHT I KNEW THE WORDS TO MAKE YOU SMILE
AND BRING BACK THE FIRE
BUT TAKING YOU HIGHER, IS GETTING ME DOWN
I GUESS I DON’T HOLD THE ANSWER TO YOUR PRAYERS
OR MAKE YOU BURN WITH DESIRE
NOT LIKE THE LIARS, WHO’D SCREW YOU AROUND

IT’S NOT ALONE IF WE’RE TOGETHER
ONLY PIECES WHEN WE PART
IT’S JUST TONIGHT, IT’S NOT FOREVER
IT’S NO FLAME, IT’S JUST A SPARK
BUT I’VE BEEN DYING TO CHANGE YOUR WEATHER
I JUST DON’T KNOW WHERE TO START
‘CAUSE YOU WON’T NOTICE ME
TRYING TO BREAK YOUR HEART

I THOUGHT IF I COULD CHIP AWAY THE STONE
AND TRIP THROUGH YOUR WIRES
BUT FAIL TO EXPIRE, I COULD TURN YOU AROUND

IT’S NOT ALONE IF WE’RE TOGETHER
ONLY PIECES WHEN WE PART
IT’S JUST TONIGHT, IT’S NOT FOREVER
IT’S NO FLAME, IT’S JUST A SPARK
BUT I’VE BEEN DYING TO CHANGE YOUR WEATHER
I JUST DON’T KNOW WHERE TO START
‘CAUSE YOU WON’T NOTICE ME
TRYING TO BREAK YOUR HEART

IS IT FEAR, IT IT SUSPICION
YOU’RE A RUNNER ON THE MARK
AND I CAN FEEL YOUR INDECISION IN THE DARK
Track Name: When The Darkness Comes
WHEN THE DARKNESS COMES

YOU SAY YOU’VE SEEN IT ALL
THE WAR, THE PEACE, THE RISE, THE FALL
SOME THINGS YOU MIGHT’VE MISSED
THAT YOU JUST CAN’T ADMIT
ARE WRITTEN RIGHT THERE ON THE WALL

YOU CAN’T GET UP UNTIL YOU’VE BEEN LET DOWN
YOU CAN ONLY SET RIGHT THE THINGS YOU GOT TURNED AROUND
YOU WON’T ALWAYS FIND A LIGHT, WHEN THE DARKNESS COMES TO TOWN

I GET LOST SOMETIMES, AND I DON’T WANNA BE FOUND
I JUST DRIFT AWAY OR GO UNDERGROUND
AND IF I DON’T COME UP, IT PROBABLY MEANS THAT I WANNA STAY DOWN
IT’S NOTHING NEW

I DON’T ALWAYS SMILE
I MIGHT WEAR A FROWN
I’M SO TIRED I WANNA CRY, BUT I KNOW YOU NEED A CLOWN
SO I LIFT YOU UP, AND I PUSH THINGS DOWN
TO PULL US THROUGH

YOU KNOW, I USED TO FLY
THESE DAYS I KISS THE GROUND
AND THOUGH I WANNA TRY, I FEEL MY HANDS ARE BOUND
I SAY I WON’T GIVE UP, AND THEN I JUST BACK DOWN
BUT THAT’S NOTHING NEW

I REMEMBER YOU WERE DRIVING
I FORGET WHERE WE GOT LOST
I WAS TIRED, BUT YOU WERE DIVING
WIDE AWAKE, INTO MY THOUGHTS

THIS TALK IS CHEAP
SAVE YOUR PRAYERS
IF NO ONE’S LISTENING OUT THERE
NO LIGHT, NO HEAT
JUST DEAD-END STREET
LIKE GOD’S ASLEEP

THIS TALK IS CHEAP
SAVE YOUR PRAYERS
IF NO ONE’S LISTENING OUT THERE
NO LIGHT, NO HEAT
JUST DEAD-END STREET
LIKE GOD’S ASLEEP

YOU HANDED ME THE KEYS
THE IGNITION WOULDN’T TURN
I COULD SMELL THE GASOLINE
BUT I COULDN’T MAKE IT BURN
SO AFRAID TO ASK MYSELF
WILL I EVER LEARN
Track Name: One Mississippi
ONE MISSISSIPPI

JUST TELL ME WHERE I WENT WRONG
‘CAUSE RIGHT NOW I’M FEELING EVERY WORD, EVERY SONG
HOPE YOU’LL FORGIVE ME FOR SINGING ALONG WITH THE BLUES

BUT IT’S LONELY WHERE I COME FROM
THAT SAME PLACE YOU FOUND ME, YOU LEFT ME TO RUN
WHEN YOU PLANTED THE SMOKING GUN
LIT A FUSE

THERE’S A LINE NO LOVER SHOULD CROSS
BUT EVERY BODY GETS TEMPTED, EVERY SPIRIT GETS LOST
AND THERE’S NOTHIN’ THAT COVERS THE COST BUT THE TRUTH

NOW, WOMAN, I HANG MY HEAD
WHAT YOU DID LEFT ME BROKEN, AND NEXT DOOR TO DEAD
YOU CAN BURY THE NEEDLE IN THE RED, WHEN THERE’S NOT MUCH TO LOSE

I WASN’T ASKING FOR IT
NO, NOT A WORD WAS SAID
’TIL I WAS COUNTING BACKWARD IN THE FLAMES
THREE MISSISSIPPI
TWO MISSISSIPPI
ONE MISSISSIPPI

Bandcamp Daily  your guide to the world of Bandcamp